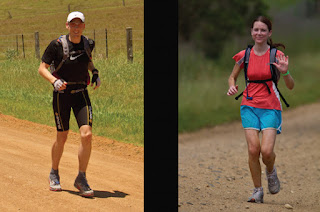 ﻿
Going in to the 2010 GNW 100M I had no idea how my body and mind would cope with my first 100 miler. My strategy was to to go out and run the 100km as I normally do and then take it from there with the intention of making it to Patonga.

At the start I was a little nervious but seeing and talking to familiar faces helped settle the nerves and before too long we were lining up on the road for the start. I quickly settled into a comfortable pace with Sir Runalot beside me with the intention of getting the bitumen section over as quickly as possible. In my excitement I found that I was running a lot of the hills that I would normally be inclined to walk during training, however they seemed less steep or long or something in the morning with everyone else around me so I put my head down and did what felt natural.

I arrived at CP1 with Sir Runalot right by my side, I think we were 5th and 6th overall. We were met by out support crew and were in and out fairly quickly. The day was really starting to warm up and the humidity was bringing out a rarely seen sweat in me. Sir Runalot caught up to me after walkin out of CP1 eating his weet-bix on the go and hung with me for a while before he dropped back near the decent to the valley road to CP2. Having done Congewai Rd a few weeks earlier I was really worried how I would go during the race. During the training run the road seemed to be my kryptonite and sapped all my strength and energy. I was really pleased when it was finally over and I pulled into CP2. The extra gear, although small, coupled with 2L of fluid really messed with my mind and fealt as though I was carrying two bricks in my pack. I suppose it was good in a way as it encouraged me to drink in order to lighten the pack. The climb up from Watagan Ck was tough, and never seems to end but at the top I saw Dave B. The look he gave me up top was one of satisfaction as he seemed to take pleasure in knowing I was doing it tough on his course. After seeing it I was determined to conqure this event by finishing at Patonga.

After dropping Sir Runalot I spent the remainder of the 2nd leg and most of the 3rd running by myself, until I caught up with Bear just before the unmanned water stop. On the approach to The Basin I encountered the fallen tree. I didn’t know what to do. I was pretty confident that I was on the right trail but it certaintly made me ask the question. As no one was around I decided to have a little fun and climed right over it instead of around like I think most people did. I was supprised to enter The Basin and find Dave W and Matt C still in. I sat down with my crew as they pulled out the rubbish from my pack and reloaded me with more supplies. As I was sitting down having the leeches cut from my shoes and legs, Dave W come over and asked if I wanted to run with him and Matt C as they were looking for some more motivation on the next leg. So together the two of us ran out in a two way tie for first in the 100M event with Matt C in our shadows. On the out and back we passed a few runners and were able to gauge where we sat in the field. It was really good to run with Dave W for a bit as he really pushed me and kept me honest for most of this leg.

After getting onto the road at Cedar Creek I started to loose Dave W and I think I gave everyone a huge shock to come into Yarramalong 2nd overall leading the 100M event outright. I quickly got refueled and ran out again with my headlight on, as daylight finally dissapeared, by my self and started to wonder if I really should have organised a pacer for the next two legs. I did the out and back only seeing Matt C along the way and I quietly snuck up the hill out of Yarramalong Valley.
As I got to the top of the hill my headlight light started to play silly buggers so I stopped to fix it. While doing this Beaver and his pacer Russell caught up. Although I need help to fix my deadlamp I didn’t want to ask for help from them just incase they permantley fixed the problem for me, ha ha. I got so frustrated in the end I just grabbed by backup light and off I went after them. At the unmanned water stop, we met up again and this time was joined by Keith and his supprise pacer Johno who had DNF’d earlier in the day. This really shocked Beaver as I’m pretty sure he knew he had me covered but to have 2 members of Quality Meats so close surely gave him the HTFU. I don’t think he knew that Johno had already pulled out. I ran along with Beaver for a while and he even let me borrow his pacer for a few Km’s which was nice of him, but it didn’t last very long. All four guys got in front of me before I reached Dog Trap Rd, and when I finally reached the road I could see two drunks/bums up ahead between two of the garbage bins. When I ran past I realised it was fellow ultra runners Keith and Johno again, and after I shared some encouraging words with them it was apparent that their day was coming to an end. I ran into Somersby PS 2nd and was quickly processed by my crew and back out, 17min behind Beaver.

The next leg was pretty uneventful and I was soon into the last CP. My crew informed me that Beaver was still 17min ahead and I was glad to know that I hadn’t lost a minute to him even though I had done the last leg on my own. At this CP I picked up my pacer for the last leg, Ted W, and off we went.

This last leg was just how I thought it would be, tough. It was also the reason I had been ignoring it having done it back in April and once again in October with Mick. I think that this was probably also my downfall as we made a wrong turn, and although we quickly realised the error it was irritating none the less.

Coming down onto the beach at Patonga was a huge relief and a massive sence of achievement. I was glad that I had conqured the GNW100M (shortened course) in under the 26hrs that people said I could.

After finishing I was told that Beaver was getting SMS up dates on how far I was behind him at CP’s and that after Old Mooney Bridge he could see my AY-UP chasing him. All that I can say is that I was happy to push him to the end and that he definately deserved the win.

Was it a tough course? Yes, and the heat and humidity didn’t help. Will I be back next year? Of course I will.
Posted by Beth Cardelli at 14:56