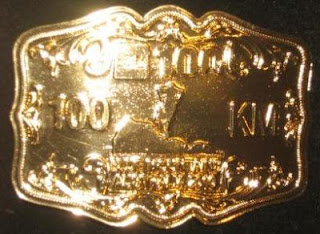 ﻿
Wow. I was not expecting that. Leading up to the event I had the usual thoughts; “have I trained enough”, “will I be able to finish”, “how cold will it be”, etc…

Looking at the entrants list I was a bit intimidated by the strength of the field. I guessed that I was probably ranked 4th and a repeat of last years podium finish would be a tough challenge.

At the start line I wanted to stay near the front to avoid being shuffled back too far on the first road section down to the narrow section of walking trail. As the countdown to the start began my heart started to beat faster and harder, and then we were off. As I predicted I got overtaken by all the ‘road runners’ and as we entered the first bit of dirt everyone continued to move pretty well.

I ran most of the first leg with Julie Quinn close behind. I knew that if I stayed with her then I was sure to have a solid race. I had no idea that we would spend the rest of the race seesawing in each others shadow. It was good to spend some time running and chatting with (Little) Terry along Narrow Neck. At the end of Narrow Neck is the part of the race I like best, the ladders. It is such a unique part of the event. I could have spent all day going up and down them, maybe not.

Iron Pot has to be the worst section of the course. I can’t think of anything I like about it, but I couldn’t imagine the race without it. Spud helped to take my mind off the worst part of Iron Pot.

Going up Nellies I stopped off for my ritual drink of mountain water from the third creek up. There is something about the earthy taste of the water that I really enjoy.

As Julie and I descended the Giant Stair we passed Angela, who looked like she was struggling. At this point we moved into 1st and 2nd place. Running through Jamison Valley I was surprised to still be with Julie. I had no concept of time (not running with a watch again) so didn’t know if she was running fast or slow. Being in the positions that we were I knew it couldn’t have been too bad. Going up Kedumba I started to put some distance between the two of us. Having participated in the NSW Mountiain Running Champinship up this part of the course a few weeks earlier, I knew what it was like to go all out up this climb and had a rough idea of how I would feel at the top. I got up to the concrete pipes at the top of the climb before I had to turn the headlight on.

When nearing the hospital I kept looking over my shoulder searching for Julie's headlight. I must have gone through that checkpoint pretty fast as my timing chip failed to register a time (thank goodness for the manual backup). Along the last leg I put everything I had into it. I no longer cared about having dry shoes and I don’t think I managed to miss one puddle.

Crossing the finish was a great relief. I was really shocked to see the race clock. It was the first time throughout the race that I really put any thought towards a finishing time. In reflection, I wish I had, because I could have got closer to the record.

This being the third year that I have turned up to compete in TNF100, it is good to see that AROC has stepped up their management of the event as the numbers have continued to grow. The future of this event appears to be in good hands!