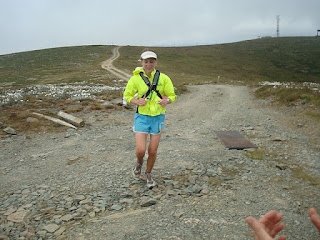 ﻿
I travelled down with B1 (husband and training partner) on Thursday from Sydney, meeting my parents at the Alpenhorn Hotel which has a beautiful view of Mt Bogong. We had such a lovely time last year that we wanted to spend a bit more time exploring the area before this years run.

I did this run last year so I new what to expect, although that dosen’t make the climb up to Mt Bogong any easier. B1 suggested I run with a watch so I wouldn’t fall short of my target finish time. After we were given the instruction to start in the later wave Noel (a fellow Berowra Bushrunner) reminded me to start my stopwatch, so I pressed a button and continued on. We reached the top in good time according to Noel who informed me that we sumitted one minute quicker than last year. I looked at my watch and it still read 00.00 oopsys but I couldn’t really care less. I don’t ever run with a watch and wouldn’t really know how to interpret the times anyway.

I dropped Noel somewhere around Cleve Cole Hut and started to over take some of the early starters. On the decent down towards Big River I caught B1. I gave him a kiss for good luck, he sure was going to need it! The climb up from Big River goes on a bit and I could really start to feel it in my legs. I tried to run when I reached the top and ended up running all the way to Langfords with Jim who I picked up at Warby Corner. He lifted the pace which felt like a sprint and I thought my little legs were going to drop off. I quickly downed a couple of bread rolls at Langfords and continued to Omeo Rd where I meet up with Jim again and ran with him most of the way to Pole 333. (If I ever open a club/restaurant, I’m calling it ‘Pole 333’).

Jim took off in the mist and I soon found myself alone again trying to get an even pace happening with the uneven ground. Ran down to Dibbin’s Hut and prepared myself for the last climb up to Mt Hotham.

I started off OK but I soon felt an over whelming need to get rid of my thermal top as I was getting way to hot on the climb. Would you belive I couldn’t get the damed thing off, it was stuck to my body like sticky tape. I twisted and turned said a few single sylable words and eventually got it over my head. I took a few moment to recover from that ordeal and had a quick look around to make sure no one had seen my performace before heading off again.

Moments later the trees dopped away and I was exposed to the cooler and windier alpine weather. Within minutes I was freezing and wishing I had left my thermal top on. There was no way I was going to put that thing on again so I settled for my XXXXXS rain jacket which only came up to my elbows. I really need to start buying larger kids size cothing. I caught and then passed Jim around Derrict Hut as he was having a nice conversation with the volunteers.

Once I hit the dirt road I started to run again until the wind became too unbearable. It felt like someone was punching my sholder as I ran along. I tried to fight back and took a few swipes but it was to strong. I gave in pretty quickly and optted for a walk until I hit the bitumen. I knew I was close now. Once I was at the top I saw quite a few people around the finish cairn so I made an effort to run the last little bit.

I was quite relieved to have achieved my target time and take a record that had stood since 1996. From what people have been saying Mrs Tiller got the female record while living in Berowra. As I live in Berowra I would venture to day that Berowra is a good training ground for B2H.

Well done to all the finishers and a big thankyou to all the volunteers who were always so friendly and of course Andy, Brett and Mike for making this run such a success.

This run has to be one of my favouite. It is extremely challenging, but is certainly not boring.
Posted by Beth Cardelli at 14:55