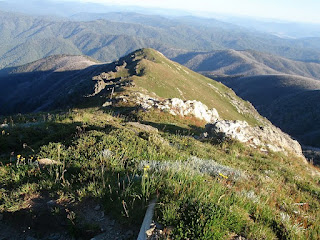 ﻿
The Roof Top Run was definitely worth the trip down from Sydney! I had tried to do as much research as I could into the run and the more I read the more intimidated I became. Everyone seemed to have a lot of respect for the course.

On race morning I was feeling a little uneasy not knowing what was ahead for the rest of the day. I was glad to hear that there would be a single group start. It meant that I was able to stick with Sir Runalot who has a similar uphill pace as mine. On the ascent I was amazed at how fast the other female runner in front of me was tackling the climb. She seemed to do it with such ease. My sense of distance and direction was thrown out the door and highlighted to SR when going down the decent to Big River how much further to Cleve Cole Hut. At lease I put a smile on his face, even though it was a serious question.

When I arrived at Langford Gap I was feeling fresh and completely distracted by the beauty around me. My crew (B1orB2 and my parents) informed me that I was the second female into the checkpoint, but would be the first female going onto Mt Hotham. Also by this point I was a few minutes ahead of SR, who usually leaves me trailing behind him, which concerned me because I had no idea if I was going out to hard. It was still early in the day and I know the forecast was for hot conditions.

I really enjoyed the second stage of the run. At one point I slowed to watch a herd of brumbies and a fowl. As I neared they ran across the trail in front of me to join an even bigger herd a little lower down. A real highlight for the day.

As I neared the top of Mt Hotham I was surprised to see B1orB2 come running up from the carpark below. Apparently the crew had only just arrived having left shortly after leaving SR at Omeo Rd. I reached the finish in 9hrs flat. My fault really as I don’t run with a watch. It wouldn’t have mattered much, but at least I have a PB for the course. It was good to have a chat with all the other runners at the finish and to just stand still and take in some of the awesome scenery on a perfect cloudless day. 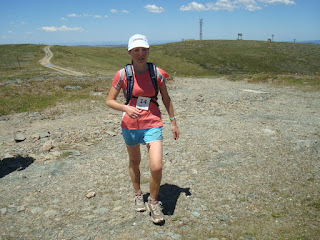 Thanks SR for keeping me company in the first half, and well done for the sub 10hrs. I know next year you will be a lot quicker. There should have been a special award for Mick. It was a pleasure to run with you earlier in the race. Your determination to carry on and finish in the time and state you were in was courageous.

For sure I will be back next year, maybe even with a watch.

Thanks B1orB2 and SR for changing my photo. I will now have to change my password.