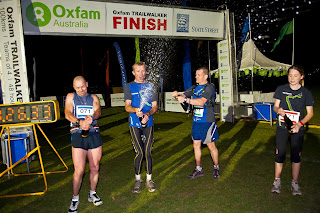 As the latest addition to the team I knew that I had a lot to live up to. On paper I was by far the slowest member of the team under 50km, and unlike the clubs previous win (with the slowest ever winning Sydney Trailwalker time) I knew that our target of 13:30 was a realistic target for us and would have to leave it up to fate to determine how well this would compare against the other teams.

The days plans were thrown into dissaray when out of the blue a team manager came over to us and comandeared one of our crew members, as she was short one runner for her team. Off Chris went into the admin tent, only to appear shortly after with a race number and the biggest cheekiest grin. At least Shaun was able to make it to at least one team training event, which also happened to be the day of the event. 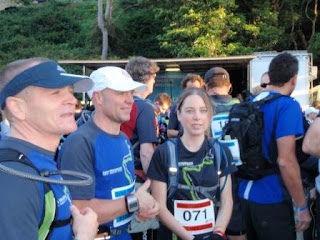 ﻿
At the start line team members were admitting that they had suffered recent injuries. One of the boys rolled up the leg of their pants to revail a nasty looking shaving injury to their shin. Very unfortunate but the quality of shave over the rest of the area was quite good (for a bloke).

As the gun went the day started in earnest, and the first hill kept everyone honest. Having walked the hill the week before I was glad that no one was attempting to run to the top. We quickly fell into a comfortable stride as we traversed familiar territory and found ourselves towards the front nestled between the first and third teams. This proved to the be the theme for most of the day. 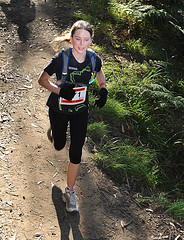 ﻿
As we arrived at the checkpoints we were informed of our position (as well as how strong the leading team looked) and reminded of that seemingly impossible 5min gap to first place. Our tactic was still to keep the same splits as planned as anything can happen in a long team event such as this one.

Conversation along the trail had been off and on, but by Davidson Park the concensus amongst us was that we do have more than one girl in the team (name with held). It appeared that there is a strong corrilation between the distance covered and the female side of the boys. Little did we know however that things were about to change. 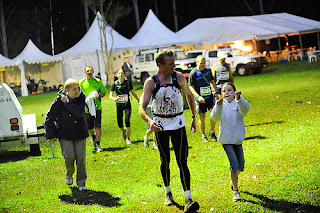 ﻿
Just before the fire trail leading to the natural bridge we happened upon team ACTrun who were suffering difficulties. As we passed them the boys from our team knew exactly how they felt; they had been there last year in a similar situation. Our arrival at Ararat Oval was announced by Dave's two girls screaming excitedly accross the oval. This sent our support crew into action (and delight) without their usual 5min warning provided buy the leading team. Our stop at the checkpoint was brief, if not non existant. Everyone was not going to let this opportunity pass.

Crossing the finish line was a sence of relief. For others in the team it was mission accomplished. I am glad to have been up there mixing it with the boys all day long.

I would like to thank the boys in the team for looking out for me. You really showed your team spirit.

Also a big thanks to our support crew. Without our precision we would have spent more time at the check points sitting down, talking, eating, drinking, waisting time. 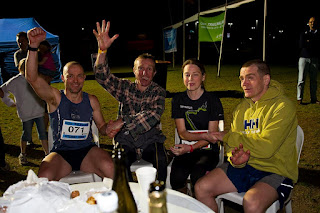