For me, Ultra Trail Australia 100km (formerly known as The North Face 100km Australia) is an event that inspires and motivates me. When I first heard about the inaugural event back in 2008 my initial thought was that I have to give it a go. I wasn't a runner back then, far from it in fact, I was just someone who enjoyed spending time outdoors, especially in my beloved Blue Mountains. Back then the thought of completing 100km was daunting, it still is, but the generous cut off meant that even a steady walking pace would see me through to the end. With a bit of trail running practice I managed to complete the event in what I considered a pretty respectable time of 15:30. From memory it took me until the following Tuesday before I started looking forward to the following years event. This has pretty much been my story every year since.
When training for events I like to mix it up. I need to in order to keep the motivation. A few year's back I wrote a training diary, documenting all the runs I did in a calendar year, listing distances, places I ran, people/friends I ran with, and other general comments. That particular year I was happy with the way I performed on the UTA100 course so I've used this diary as a rough training guide for subsequent years. It's something that has worked for me and I'm happy to continue doing it. It doesn't, however, prevent me from running with friends who need to run specific distances, or for a specified duration at a certain intensity. But hey, if it works for them then I'm happy to tag along.
Just about every weekend this year I've been up in the Blue Mountains training for this and other trail running events. I've been up there so much that I've submitted an application for temporary residency. This is the most I've journeyed up to the Blue Mountains for training runs and I think it has definitely helped. Last year my husband, Brian, was building us a new home in Sydney. Our life was unsettled at the time and it was most noticeable to me at last year's UTA100. I'd spent months training for the event, to make up for missing the 2014 race due to injury. I'd gone through all the motions to race the 2015 event, but that was all it was. Going through the motions didn't mean that I was ready to tackle 100km, especially on a course I love so much. So with a heavy heart, sitting in the event carpark on the morning of the UTA100, I solemnly removed my race number and joined Brian in spectating the start of the race. Fast forward a year, and living in our new home, I now had Brian to support me in my training. I felt renewed and invigorated. Most importantly I had motivation and full support from Brian. After a two year hiatus, 2016 would be the year that I renew my affinity with UTA100.
I had a goal in mind for this race, but like everything with ultra trail running, you need to be flexible with your goals and adaptable. My preference in races is to go out at a sustainable pace which is relative to the course. This course starts at first light with an uphill run along a bitumen road, which coupled with a weeks worth of tapering results in something resembling a stampede of eager runners. After 5kms of seeding on the bitumen road the course changes tact and moves to single trail where another round of seeding begins. In order to avoid being left behind I made a feeble attempt at staying with the leaders by starting towards the front of the pack. As soon as the countdown was complete and we lurched forward in unison, I was quickly filtered through the pack. By the time I was finally on the trail, Brian and my mum had set themselves up to spectate (ring cow bells) at the top of Furber Steps and they kindly informed me that I was 4th Female as I passed. Now firmly on the trails the descent down Furber Steps and traverse along Federal Pass to the Golden Stairs was much more to my liking and the road runners were quickly being seeded backwards amongst the trail runners. The ascent up Golden Stair was it's usual grind and I resorted to the hand on knees technique to see myself to the top.
Now that my heart had started pumping and my legs had loosened up I got into a comfortable rhythm along the Glenraphael Drive fire trail which runs along Narrow Neck plateau. A short way along Narrow Neck is the first checkpoint (11.4km). I came through here in 50th position (2nd female), which has been pretty typical for me based on previous years. Just ahead, within sight was Kellie Emmerson, who was setting the pace for us girls. As I quickly filled my UD body bottle at the checkpoint I was passed by Gill Fowler, whom I left the checkpoint chasing. Shortly after the checkpoint I saw up ahead that Gill had passed Kellie and in an attempt to catch Gill I upped the pace and also passed Kellie not long after. I find the fire trail along Narrow Neck to be most annoying. At times it seems to go on forever, at other times the twists and turns seem to repeat themselves. I've often found myself thinking "will this ever end" but then there are sections along its length where the views open up to reveal spectacular Blue Mountains vistas, with the most spectacular of these being right at the end of Narrow Neck plateau.


Departing the checkpoint I pinned my ears back and started on the 6km descent down to the Jamison Creek. For the most part I was running by myself. To make things interesting I focused on catching and overtaking as many UTA50 runners as I could. I hoped in doing so it would help propel me in reaching the finish line before the day's last light. Each person I passed on the trail was most enthusiastic and their encouragement was much appreciated. On the climb between Jamison Creek and Leura Falls Creek I was caught and passed by Andy Lee. He was steaming ahead and I tried briefly to stick with him. In the final 12km of the course he put 16 minutes on me. A true testament to his abilities.


Shortly before the "old turd works" I caught up to an old friend, Grant Ackerman, who was doing the UTA50 event. I'd helped him out with some advice leading into the event and it was good to have caught him so close to the end. We exchanged pleasantries before I ran ahead.


After the "old turd works" the course rejoins with itself for a short 200m section between Leura Forest and Leura Steps. This was where I had earlier made my move on Amy. This time I was hopeful of seeing some friends along this short section of trail, but the people I saw I didn't recognise. The tourists along this part of the Federal Pass had mostly retreated back up to the top of the cliffs and I pushed as hard as I could in the rapidly fading daylight.
I reached the bottom of Furber Steps which I'd descended 93km ago and a whole day earlier. The variation in grade and variation in step heights were quickly taking it's toll. I was cursing the course setter for finishing an ultra trail run like this. If it had come to a sprint finish I doubt that I'd have the strength to out sprint or out climb anybody. Put simply I felt like a snail going up Furber Steps. The higher I got the more I could hear the commotion at the finish line. I started to feel less of my screaming legs and started thinking of the finish line ahead. I paused briefly toward the top to put on my head torch before I lost all remaining daylight. With a final push I managed a respectable jog as the gathered crowds appeared before me at Scenic World. Crossing that finish line at Scenic World was just spectacular. It's the best finish line the course has ever had, and trust me I've been across a few of them. The finishing chute was spectacular and the roar from the crowd was thunderous. It felt awesome, until I stopped and the fatigue and cold started setting in. I was elated to have finished another UTA100, this time in 11:16:14, first female and 17th overall.

The most touching moment for me after finishing was when Brian revealed that he had shed a tear or two for me and my achievement. This along with his house building ability are just two of the many reasons I love him so much.
I want to congratulate Tom Landon-Smith and Alina McMaster along with their AROC Sports crew who have grown this event from its humble beginnings to what is now a professional world class trail running event. I'd like to congratulate them for their efforts along with the efforts of all the volunteers who helped out and encouraged us runners tirelessly out on the course.
I'd also like to thank La Sportiva Australia and Ultimate Direction Australia for their support. Their gear was absolutely perfect for this race. 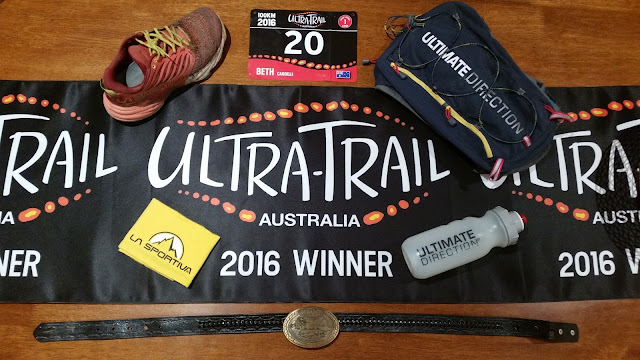