The next race in my 2013 'Living the Dream' trip was the Dolomite Vertical Kilometer (VK), which also doubled as the European Skyrace Championship in that discipline. I was attracted to this event for a few reasons; it is a style of race that I have not done before, it goes higher than any race I have done in Australia, it is short but very steep and I get to test myself against some of Europe's best.
In the lead up to the event Brian and I stayed at an Austrian town called Schruns, nestled in an alpine valley just shy of the Swiss boarder. The mountains around Schruns were big like most of the mountains I had seen so far in the Alps, but to my luck there was a good place to practice my straight mountain climbing skills in the form of the Europatreppe 4000. Essentially this is a series of 4000 steps running almost continuously up the side of a mountain following a now disused pipeline. The total climb is 700m and the stair does it in 1.35km of distance,  with grades of up to 86% (I didn't know what that was,  but I do now having climbed it). My first attempt was 32min. The following day I returned and  did it in 31min. Not a great improvement,  but it was better than my first attempt and I now had a feeling of what this vertical kilometer was likely to be. 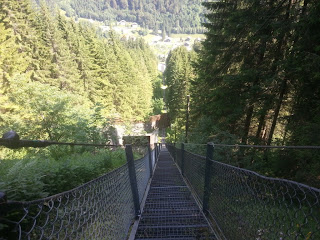 Halfway up Europatreppe 4000 looking back towards the start at the bottom. 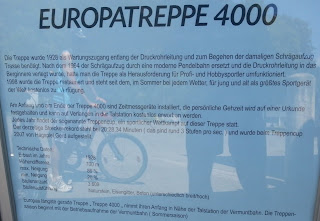 Europatreppe 4000: all the stats, which do not make it any easier.
Turning up to Canazei, Brian and I started scoping out the slopes trying to identify where the VK will be held. On the day before the event we went in search of the start area,  which wasn't all that hard as it was already marked with a little yellow sign and if that wasn't a big enough giveaway then we only needed to follow the procession of runners with really long poles. As the race would be held less than 24 hours away I promised Brian that I would walk it,  but not necessarily stick with him. I got to the top in a casual time of 55min. I wasn't particularly disappointed with this effort. On this attempt I chose a shoe which didn't have much grip, I wasn't being pushed, didn't have poles (don't use them, don't have them and they are more likley to be a hindrance to both me and the people around me if I started using them for this event). I descended off the lofty heights of the VK course feeling confident that I could possibly do 50min, going off my improvement from the Eurotreppe 4000.
The afternoon before the VK it started to rain, a lot. I was wondering how the course would stand up to the downpour. At the race briefing they informed us that there would be start waves with groups of runners going off at 4 minute intervals. The last two groups would consist of the elite VK runners.
Come race morning the skies had cleared and it was a beautiful morning for trail running. We were organised into start groups based on our bib numbers. While we were being organised a guy with an Aussie accent comes over to me and asks if I was Beth. It turns out that there would be another Aussie in the race in the form of James Stewart from Canberra. After our brief introduction I wished him good luck before watching him line up in wave 1 an then heading off up the mountain in a flurry of poles. Looking around it appeared that I was the only person without poles. No, I lie. I did spot a few people without poles, but that was because their poles were on the ground or being held by friends who already had their own pair of poles. Well poles aren't mandatory equipment but neither are shoes and everyone had shoes on. Perhaps you needed poles for this type of running?

I lined up in wave 5 as dictated by my race bib (these really were race bibs,  not just a race number). I placed myself at the back of the group, out of respect for those around me who all looked like seasoned VKer's. My expectation for this race was to just beat my time from the day before and try my best. In another flurry of poles my wave started on up the hill. I gave Ian Corless a wave as I ran past him chasing the others ahead. He seemed to look concerned and gave me a sense of urgency, something I'm unfamiliar with given my style of running. I soon caught and passed the second last runner in my group then the next and so on.

The VK course starts in a farmers paddock. The race organisers were kind enough to have mowed it prior to the race. From the start area the trail goes up, up and up. Firstly following a narrow strip of mowed grass and wild flowers on a cambered upward slope. The wild flowers quickly give way to pine trees as the hill gets stepper. There was a small bit of downhill in this section where we lose maybe 1m of elevation,  however this is brief and isn't repeated again on the course. The trail narrows as it ascends up through the pines to a narrow dirt trail. In sections this trail has foot holes cut into it to help with the ascent. Without these foot holds you would just slip on the grade. In other sections temporary stairs had been constructed using branches from the surrounding pines. As the trail continues to ascend and the pines start to thin out there are rocky outcrops that require negotiation. These would have been easier if it was just rock instead of the layer of dirt which covered them. It was also around this section that the marmot burrows started appearing. I wonder what the marmots thought as a few hundred runners with poles (me excluded) came running, tapping and panting past their front door? The pines finally gave way completely to grassy alpine slopes and a wonderful view across the valley Val di Fassa. The top section of the course is a little deceiving as the trail goes to a sadle between two grassed rocky outcrops in which the race organisers place a large blow up arch. Unfortunatly this arch is not the finish. The finish is further up on one of the grassed rocky outcrops.

During the race spectators had lined most of the course. They yelled,  screamed, rang cow bells and even gave runners a push from behind. It was great to have this level of support on a trail run.
I was happy the way I paced myself for this run. I started conservatively and spent the whole ascent overtaking people who were clearly tanked. My shoes clawed at the ground and held firm. I ran with gloves to help pull and push me up hill using anything within reach; rocks, trees, even grass. Don't get me wrong in thinking it was easy. It was far from an up hill walk in the forest. My breathing was labored, but under control. My legs were burning. I was pushing on both my knees with every upward step. I absolutely loved it.
As I neared the finish I could see another girl ahead of me who started in my wave. I closed in on her and although we were both very close at the end I finished a whole 9 seconds behind her. At the finish gate I grabbed a recovery Coke from the refreshment table then checked my time on the live timing TV screen that was rigged on the side of the steep slope. My time was 43:53, second behind the girl that finished just ahead of me from my start wave. James finished in 42:51 and was looking good sitting amongst the fast guys, at least that was the way it remained until the elite VK runners started their ascent. The elite men started first with the elite girls starting last. I watched the first girl (Antonella Confortola) come across the finish, then a full two minute wait for the second girl (Emelie Forsberg) then more girls started trickling over the line. James went and checked the TV screen again then came back and informed me that I'd finished 6th female. I was pretty happy with my performance, far exceeding my initial expectations. Plus I was just 52 seconds from second place, so it was a tight contest.
That afternoon I was presently surprised to find out that my exertion wasn't particularly taxing on my body. Everyone I had spoken to regarding the VK said that I'd recover in time to run the Skyrace in two days time. I'd placed a lot of trust in other people's faith and was glad that they were right.
In reflection I don't know if I could have gone faster in the VK, particularly on that course which is almost entirely power walking. Perhaps if I'd started with the elite girls they would have fought harder for their positions, and possibly me mine. Apparently poles give you a distinct advantage when climbing but that requires skill, technique and some upper body strength. I suppose the only way to find out is to give a VK another go!
I would highly recommend the VK race format to all my running friends. It is a worthwhile experience that just about every trail runner/walker is capable of competing. It is less about speed and more about determination.

Check out the Dolomite Vertical Kilometer video below. The only problem is that the video does not do the course justice. It doesn't capture the cross camber of the course on the grassy slope at the beginning or the steepness of the assent. It does however give you an indication of the effort that everyone puts in to get to the top. You might also see a shot of me at the beginning doing up my shoes.