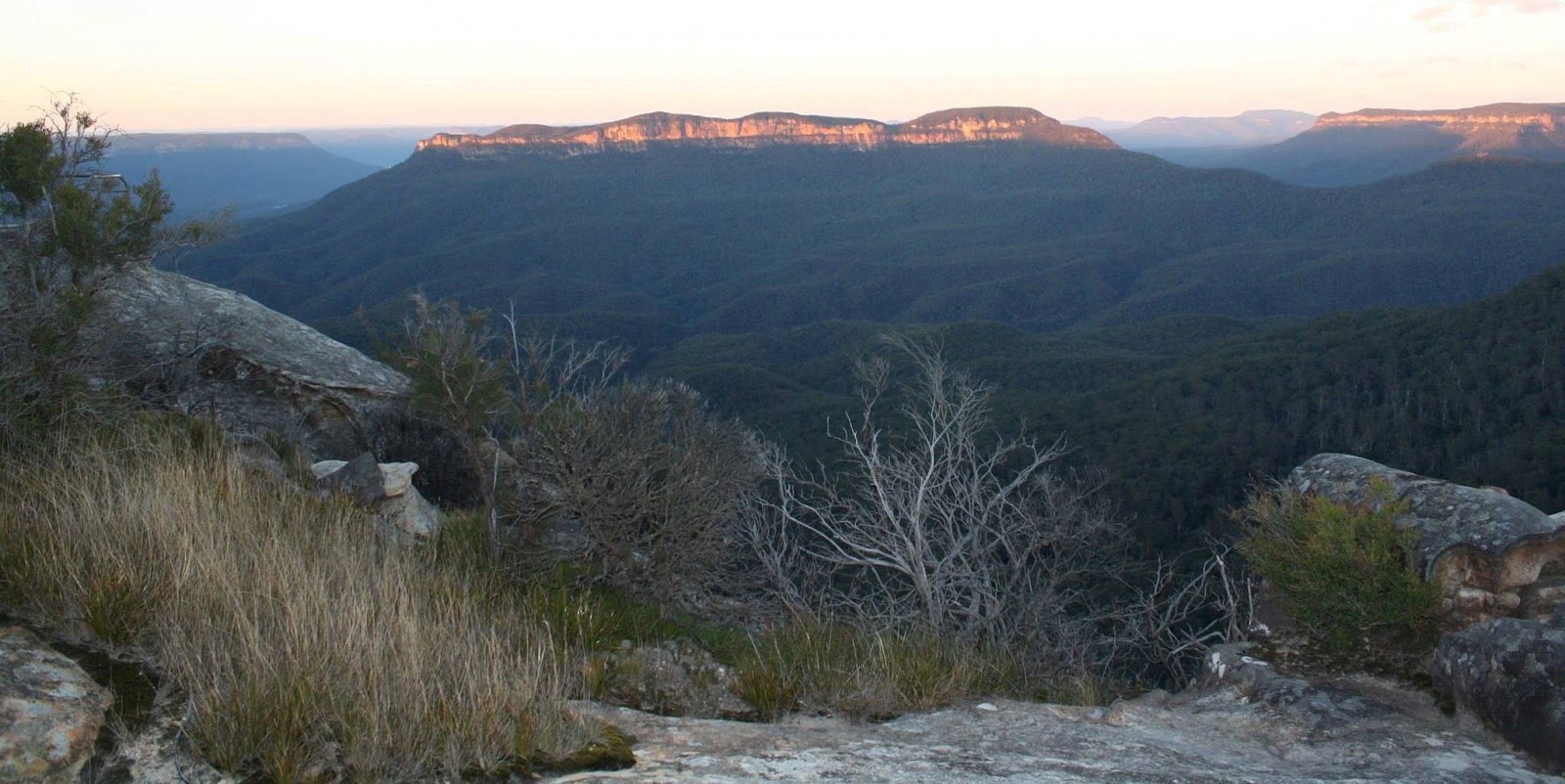 What really impressed me with this year’s TNF100 event was the sheer number of PB's from repeat offenders and top performances by newbies on this course.

I have a certain affinity with this event. It is in the Blue Mountains and I love the Blue Mountains. It traverses some of my favourite locations with stunning views. It was my first 100km event and first big ultra. I ran in the inaugural event (2008), which was held shortly after I started running. During the first event all I could think about was just finishing and perhaps getting a silver belt buckle (then available for sub 20hr finishers). I trained as hard as I could and was absolutely stoked to finish, and more so to have done it in 15:30. The lead guys and girls in that year’s race managed to finish in 10:22 and 12:45 respectively. I was in absolute awe of their athletic ability and couldn't comprehend how people were capable of traversing such difficult terrain in the times they did. They must have been exceptional athletes to accomplish such incredible times.

After the first year there were rumours that the event might have been a one off, but I was thrilled when entries opened and I was once again training for this epic event. I must have been one of the first to put an entry in. The number of entrants grew and along with it the sport. Reflecting on it people trained harder, gear was more developed and people in general became smarter in the knowledge of how to tackle this beast. This particular year my goal shifted from just finishing to getting another silver belt buckle (now only for sub 14hr finishers). I wasn't sure what I was going to do with a second belt buckle, as I only have one waist, but I wanted another one for what it represented and a new PB in the process. I suppose what I really wanted was to achieve a new goal that I felt was within my reach. My finish time that year was 13:36 and my goal was realized. To top it off I was lucky enough to make the podium to claim second place but I was still a long way from Julie Quinn who was out front pushing the limits to set the first of her female course records at 12:13.

Come the following year the event was building a solid base of runners. My goal was once again simple; as always to just finish. I had trained a little more for this race and was confident of another PB. I was a little shocked when I dropped down into Jamison Valley with Julie in equal first. I had never been in this situation before and wasn't too sure on quite how to handle it. My approach was to keep running within my own limits and what ever happened so be it. Climbing out of Jamison Valley I spent the whole time power walking/running scarred thinking that my lead would be gone in an instant when Julie caught me but she didn't. I was over the moon with my result. At the time it was the pinnacle of my running career. I didn't care that I had fallen short of Julie's female course record by 3 minutes as I had achieved something which just a few short years before I had thought was above and beyond anything I could attain.

The following year in 2011 I was sidelined with injury. It was probably the worst year to miss running TNF100 as the race had attracted a good contingent of international trail runners in the form of 'Team Salomon'. I watched the race from the sidelines and what really impressed me was Julie Quinn's performance. She ran the whole day behind the leading females only to dramatically close the gap in the second last leg, then to capitalise on her gains by taking second then first place to secure the win and the female course record in under 12hrs (11:39). Julie's performance that year reinforced in my mind how important it is to focus on your own race in order to achieve your own goals.

My goal this year was to focus on myself and try to finish in a time that I thought was attainable. I felt during this year’s race things went a little better than in previous years. My running felt more fluent. The gear I had performed better. My serviced checkpoints were measured in what seemed like seconds instead of minutes. 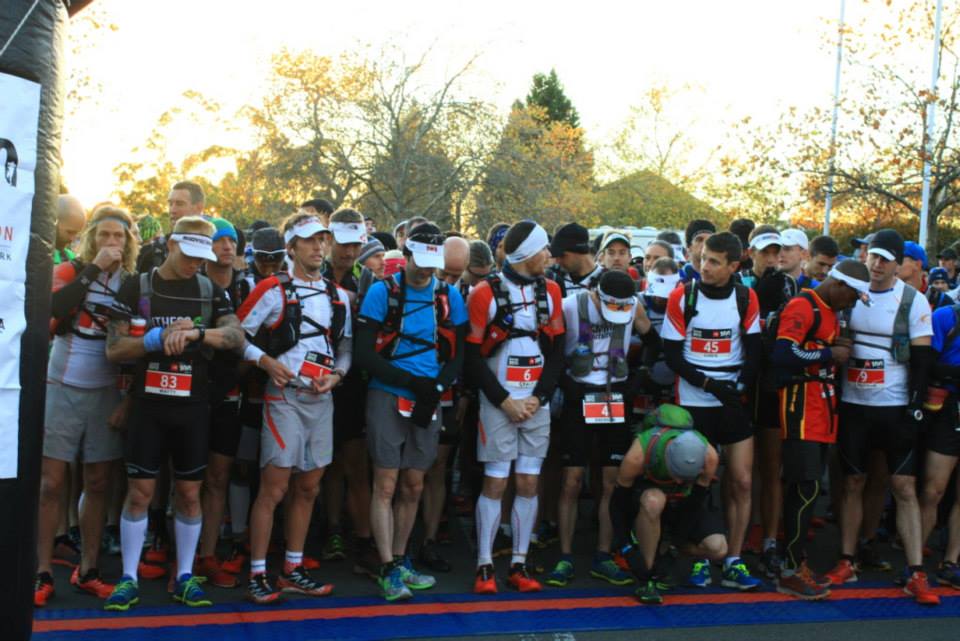 If you look hard enough you can see my legs.

Race morning was pretty chilly, no different to any other year. The Fairmount (race HQ) was buzzing with runners full of pre-race nerves. It was great to see so many spectators along the road cheering us on. The first section is quite technical with lots of stairs and single trails which makes it difficult to pass. Hanny Allston was just behind me and polity asked the guys in front if she could get through. I pulled over to let her pass but she declined the offer and said I was fine, how sweet of her. Hanny finally had enough of being behind me and took off shortly after CP1. She flew down Narrowneck. She looked so strong and powerful. I felt so weak in comparison. Shona was out in front at that stage and Hanny was not far behind. I wondered as I lost sight of them both how long Shona could hold Hanny off. I caught my good friend and training buddy Shane Simpson near Tarros Ladders, the same spot I caught him last year and at the same Shona. It’s funny how the years repeat themselves. 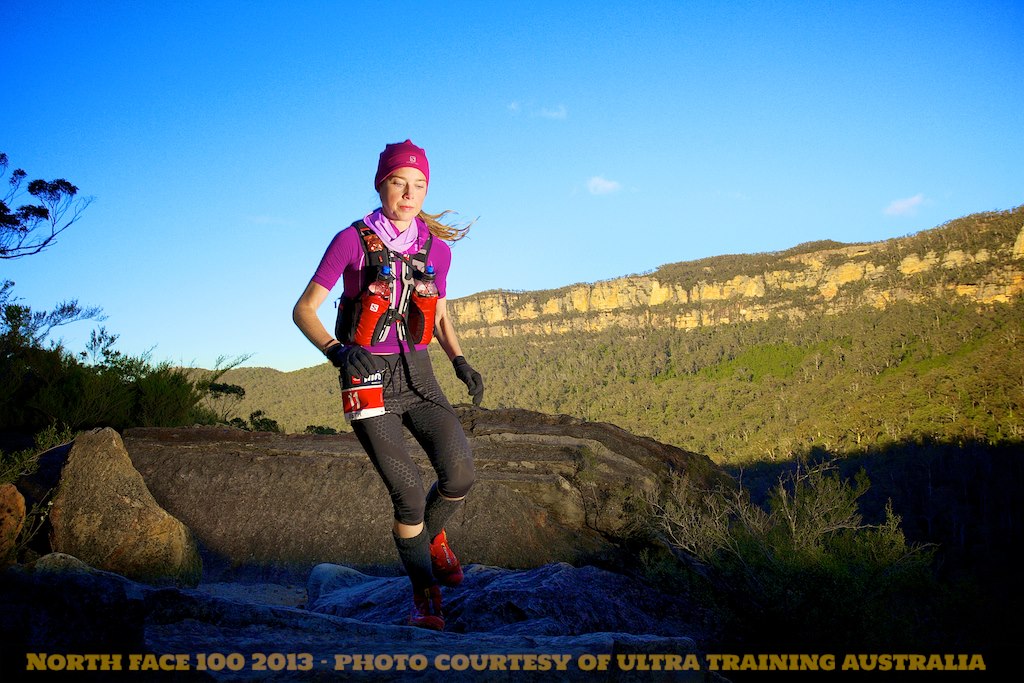 Ironpot and Megalong Valley passed without any problems and I ran into CP3 to the cheer of my supporters. Mum and Dad were there along with Brian, my aunt and uncle (Sally and Martin) along with the Berowra Bushrunner crew who were out supporting other runners on the course, and the rest of the friendly faces who form the ultra running fraternity.

Going up Nellies I caught up to Hanny where she informed me she was pulling out with an injury and wished me luck for the rest of the race. Hanny had only just decided to step up to the 100km at the last minute to give it ago. With her A race being the Orienteering World Championship in a few weeks’ time she made a wise decision to pull out. It was great to meet Hanny and I hope to race with her again in the future. 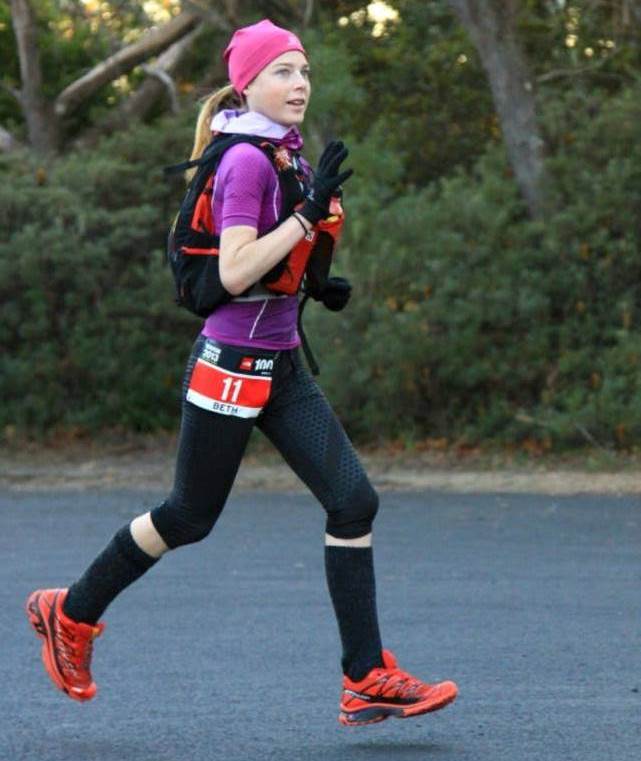 In the later sections of the race I found myself catching up to some of the top guys. A few of them had a disappointed look in their eyes as I neared them. I think it was the fear of being chicked. Coming up Kedumba Pass I caught Grant Guise who by this time had lost the spring in his step. Grant wasn’t going to let me go on the steep fire trail so we stuck together which made the climb a lot more enjoyable. We Passed Mick going up Kedumba, he didn’t look amazing but better than when I saw and passed him at a similar place last year. 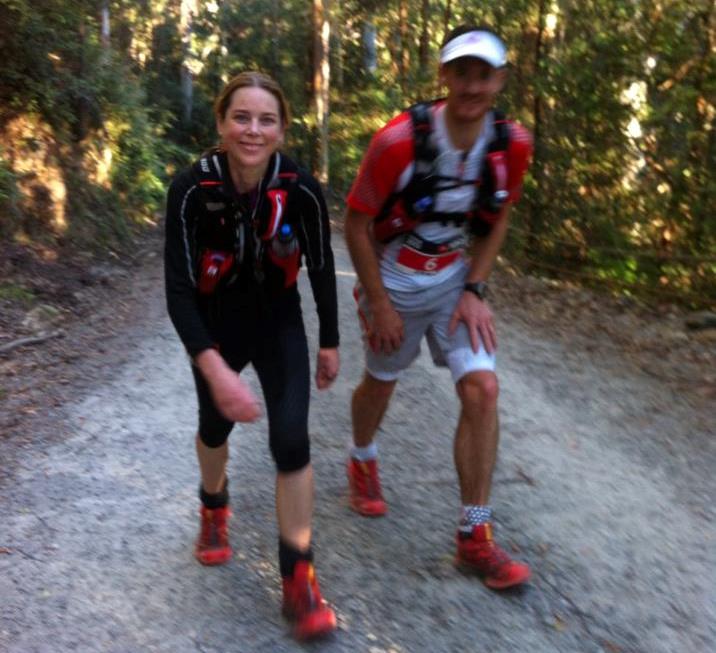 Grant and I moving too fast for the cameraman.

Chris Truscott and Matty Abel passed us near the top of the Kedumba climb but Grant and I were very efficient at CP5 and left before both of them. This was the first time I talked about my race goal with Brian, my husband and crew. He said I was still on target but would have to run hard to get it. The last leg is very technical and really does drain the last of your reserves. I put in a massive effort on this last stretch trying to keep with Grant, Grant found a second wind and started flying off and Chris Truscott caught us again. I told Grant to leave me and chase him but I guess my company was too good and he chose to stay. I didn’t want to lose him and he didn’t want to drop me. Together we made it to the finish line and literally fell over it (in a poor attempt at a leap-frog) in 11:01. Thanks Grant! 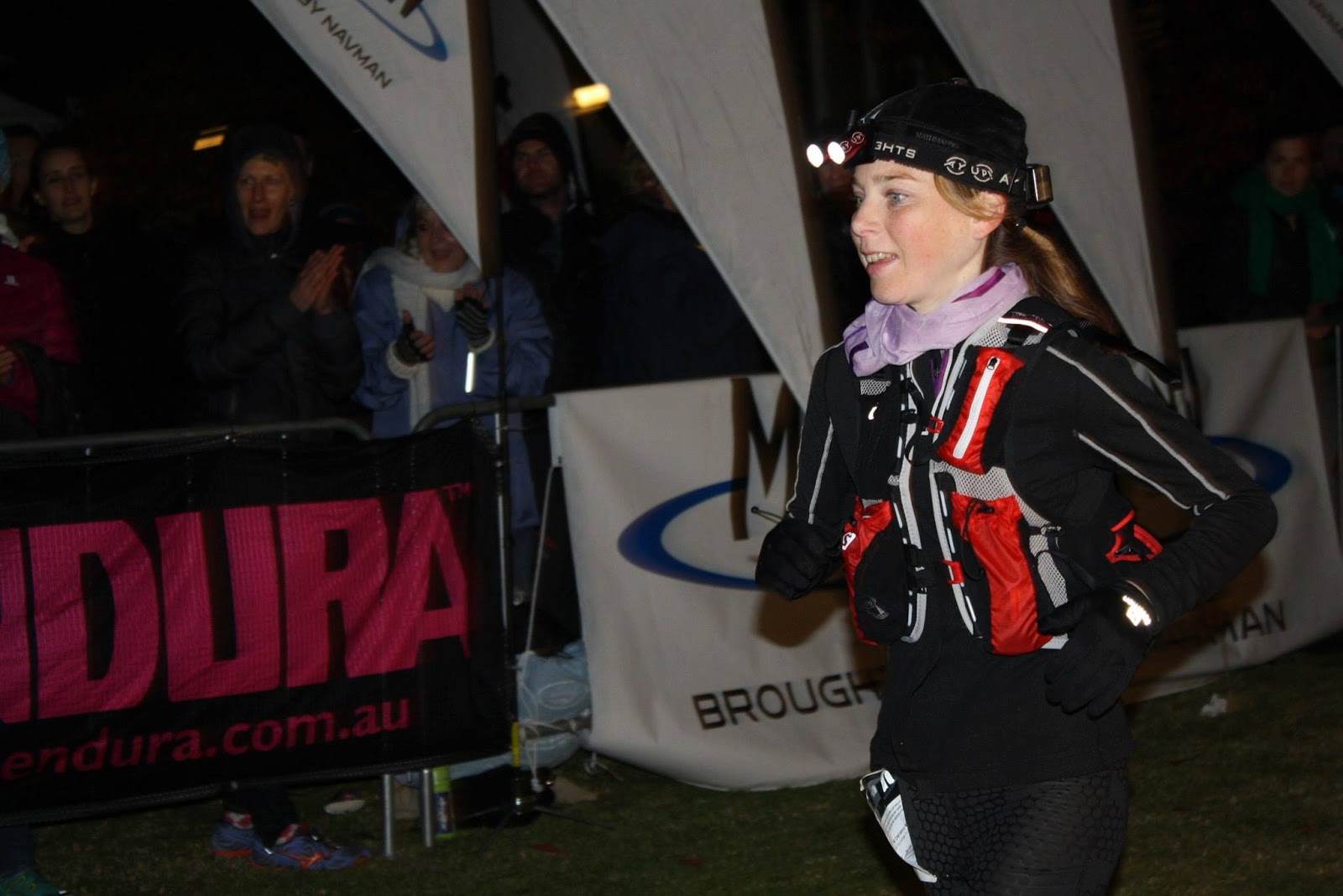 My run-up before crashing into Grant Guise.

When I talked to runners following this year’s TNF100 I feel a real affinity between their successes and mine on this course. As tough as this course is, it’s the feeling of overcoming seemingly insurmountable obstacles that gives us the biggest rewards. For me it is going from a simple goal of finishing in my first attempt to my most recent result. Though finishing with a time if 11:01 is oh so close to my ultimate short term goal. Oh well there is always next year. 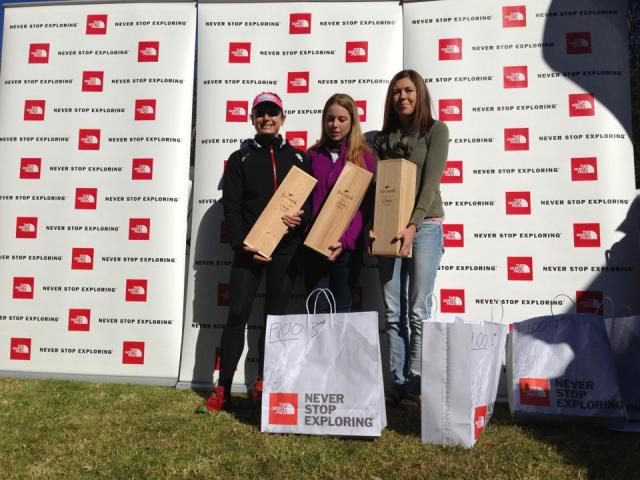