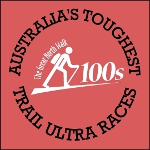 When entries opened for this event my original intent was to redeem my DNS from 2011 by entering the 100 mile event. I started my training after recovering from some niggles that prevented me from running in Sydney Trailwalker earlier this year. As it turned out the team did just fine without me so all was good, and with the break I was able to ease back into training for the GNW 100 mile event. I’m not sure what happened but my training just didn’t have the intensity for the miler, or at least what it had been in 2010 when I was preparing for my first 100mile event, GNW. As other trail running event entries started opening up for 2013 I started to become a bit despondent about doing the GNW 100 miles and I was considering if the 100mile event was really the right idea. Talking about GNW and my plans for 2013 with Brian, he convinced me that the sensible thing to do would be to drop down to the 100km event. I think he was pitching for an early night crewing. In all honesty I hadn’t considered this as an option. After I had some time to think about it, it started to make more sense and I started to find my drive again.


Most of my training runs for this year’s race had been on the 100mile course, mainly because it was close to home and partly because I hadn’t dropped down to the 100km event. I only ventured out onto the 100km course once and that was on an absolute stinker of a day with Clarke McClymont and Cooba. It was fair to say that it was good heat training for what could have been and really hot year at GNW. The following week Dave Byrnes sent an email around saying that if the area was declared a Total Fire Ban the event would be called off. So much for needing to train in extreme heat. It was a fair call as the bush which the GNW course winds through is currently a bush fire waiting to happen.


For the race I decided that I would run with two (what ended up being three) race packs. I had seen Andrew Vize do it in previous races and the mandatory gear for this event lends itself towards this strategy, unlike TNF where you are more likely to be wearing your mandatory gear which complicates this strategy. The strategy would be easy, I would run into the check point with my mobile and maps in one hand, exchange my pack for a new one, pack my mobile and maps, then continue on hopefully without breaking my stride. 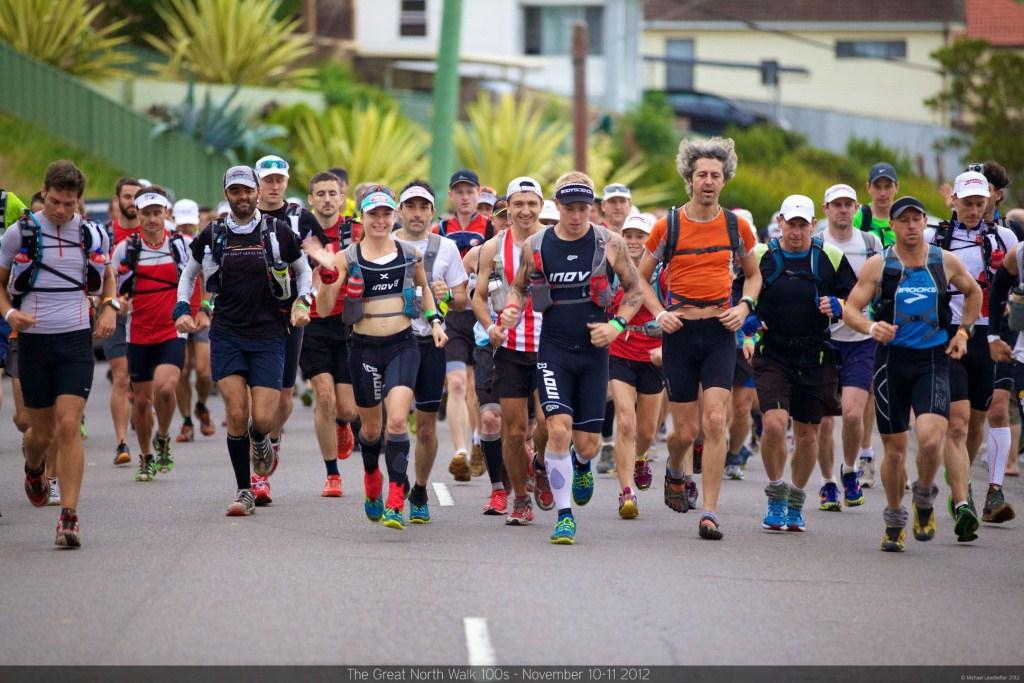 
Come race day the weather was a mixed bag. The morning was warm at the start then during the race quickly became cold and windy, then turned wet, then cleared up during the middle of the day and then started to cool down as night approached. Essentially it was perfect weather for a race. The start of this years race resembled more of an organised social run. After Dave Byrnes signalled the start of the race no one seemed to be in too much of a rush and we all sort of just stuck together until the bitumen gave way to dirt then the fun and games began. Clarke and Brendan started to move ahead (although I kept seeing a lot of Brendan in the first leg because he kept getting lost) and behind them the rest of the field started to thin out. I was glad that I had chosen to wear a shoe with plenty of grip as the first section up to Brunkerville Gap was slippery on the clay trails. Up through the jungle I and two other runners (Daymo and Martin) managed to take the wrong turn and we went off track for a couple of kilometres until we became unsure of where we were and stopped to check our maps.  We turned around and joined the race back on course. I should have picked up on the detour earlier and not followed the others. It wasn’t a big detour but it was annoying none the less. I vowed to pay more attention and not make any more mistakes like that again. Coming into CP1 (28.6km) I exchanged my bag with Brian for a new one and was back out on the course in under a minute, managing to make up a few places and exiting the checkpoint in 3rd place.


As I ran out of CP1 I rummaged around the pockets of my pack to see what I had to eat. I hadn’t paid much attention to what I had packed the day before so it was essentially a lucky dip. A little down the road there was a road marker and tape placed at the turn off where the GNW trail deviates from the main road. I thought that this was a little soft as the rest of the course wasn’t likely to be marked so well. I made it down onto Congewai Road and settled into a steady rhythm as I wound my way along the valley floor. Daymo and Martin caught up with me along the road section and we all ran into CP2 (52.5km) together. I was looking forward to getting to Congewai Primary School so I could change out of my trail shoes which had become annoying on the road section. I gave Brian my bag as I stood on the scales to be weighed. Half way and I was exactly the same weight as I was when I got weighed at the start. Brian let me know that I was 10min under Shona Stephenson’s GNW 100km record splits from the previous year. I quickly showed my mandatory gear to the officials conducting the gear check and I was out of the checkpoint and back on the road in 3 minutes. 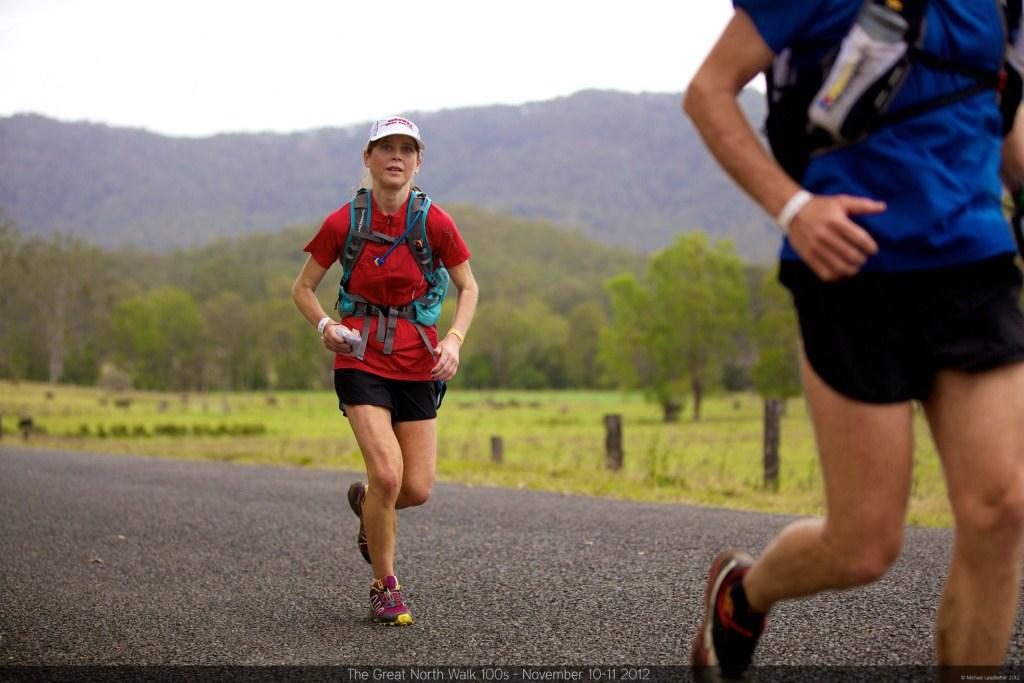 
I ran into CP2 with a few runners around me but I got the jump on them at the checkpoint and hit the trails by myself. As I got closer to the top of the hill and the telecommunications tower I looked over my shoulder a few times to see if anyone was close by but I couldn’t see anyone so continued on alone. While doing this section all I could think about was how horrible it was doing this leg with Clarke a few weeks earlier in the heat. I was grateful for the cooler weather and the fact that I didn’t have to turn around at the end and come back again. Whatever bit of trail I covered now I could leave it behind me. As I approached the Basin turnoff I wasn’t at all surprised that I didn’t see either Clarke or Brendan who were the only two runners ahead of me at this stage. This section is a 2.5km out and back so essentially you get to see runners who are both 5km ahead and 5km behind. Those boys must have been flying. I arrived at CP3 (81.6km) for another quick change of packs and was in and out again in under a minute. Before leaving, Brian let me know that I was 45min under Shona’s splits, so I knew I was still going well. 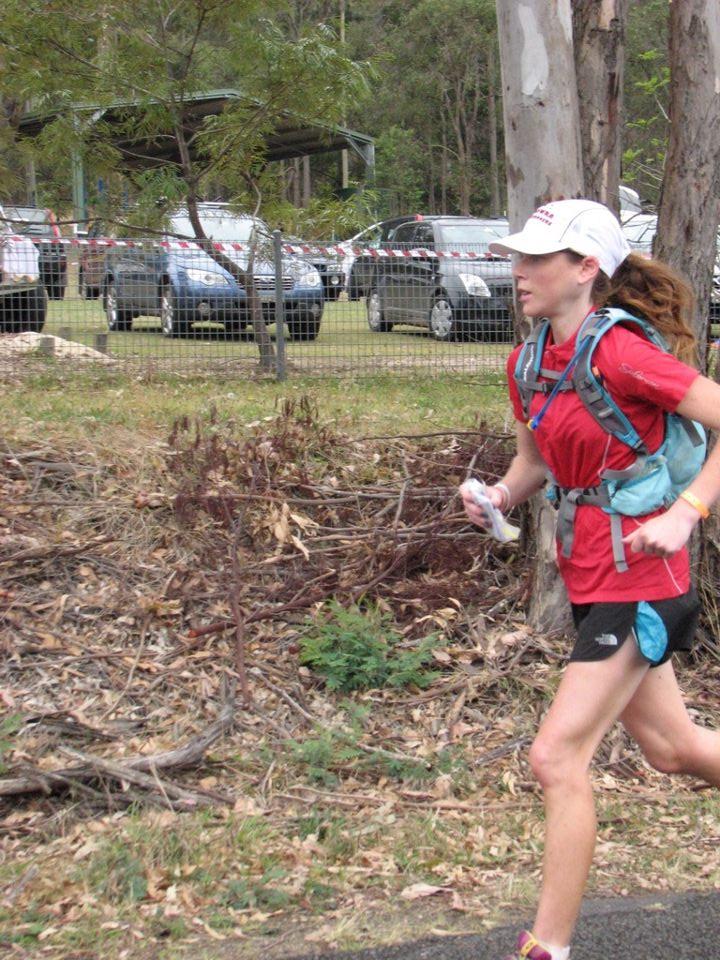 
On the way back out I passed Daymo, then Shona then a short distance back Gill Fowler and Nikolay. All four were doing the 100mile and seeing the two girls so close together it looked like the race was on. I climbed up out of the Basin to the top of the ridge then left onto the main fire trail then turned right onto the side trail. The only problem was the right turn was too early, which luckily I realised early enough. Back on the main fire trail I ran a little further down the road before turning right again. I ran down the trail thinking it was the right trail as it looked just like the one I was supposed to be on. I kept looking for the turn off for the single trail but it never came and the trail ended in a dead end. No single trail, no nothing. I felt sick as I realised what I had just done. After verbally venting my frustration at the wildlife I turned around and back tracked uphill to the main fire trail again. After venting my frustration at the wildlife I turned around and back tracked to the main fire trail again. Up on the fire trail I met Nathan Parker (fellow Berowra Bushrunner) who had also had a major navigational error, however he was on his way back down to the Basin. After exchanging some colourful language in an attempt to describe what we had just done wrong, we headed in separate directions. I now had to make up for my unintentional adventure and get to the finish line. I wondered how much of my advantage was still left and how much I could now salvage. I made it down onto the road into Yarramalong with Nikolay Nikolaev. I explained to Nikolay what I had done and how my target was now in ruins. He was really kind and did my final splits for me. I had 1hr, 10min to do the last 11km to the finish line. He was so nice he offered to give me his watch so that I could make my target time. I declined the offer and surged ahead. It would be by legs that got me to the finish line, not the watch. So full of determination I headed off down the road as fast as I could. I didn’t know it at the time, but Brian was at the finish line and had been informed by two groups of people that I was AWOL and that no one knew where I was. To make it worse I had my mum, sister and two nephews were at the finish line all waiting for me to finish. Two kilometres out from CP4 I caught up with Shona and saw that she was having a rough run. She gave me some encouraging words as I passed and I put the hammer down as I came into Yarramalong. She even gave me encouragement to break her 100km record. Coming into CP4 (103.7km) I was greeted by Brian telling me to hurry up. I came up the drive to Yarramalong Primary School and crossed the finish line in 12:36, a new female GNW 100km course record. I would like to say that I was the first female to come into CP4 but I was about 12 minutes behind Gill who had already arrived and left on her quest to finish her first 100mile event, which she did becoming the first female to run sub 24hrs, getting female GNW 100mile record and getting a well-deserved gold finishers medal. Oh well, I was in a similar situation in 2010 when I came into CP 4, under the previous 100km female record, but was unable to claim the title as I had entered the mile event and not the kilometre event. To formally finish the race I once again stood on the scales which said that I had lost 700g in the last half of the race. I put it down to getting lost, though others might say it has something to do with food and fluid.


I’m pretty grateful that I was able to get the 100km record having gone off course for so long. I would have liked to have finished knowing that I had given the run my best effort, but now I’m left with unfinished business at GNW. Til next time….