Normally I wouldn’t write a race report for anything less than an ultra marathon, however due respect should be given to the newest and one of the more difficult trail runs I have done (if you just want to read about the race then scroll ahead).
Pre Race Prologue


When talking to Sean Greenhill earlier this year about trail running he mentioned that he was working on a marathon event in the Wolgan Valley which would incorporate the Glow Worm Tunnel. The suggested date would put it at around 3 weeks after The North Face. I had been to Glen Davis. I had been to the Wolgan Valley. I had been to the Glow Worm Tunnel. I thought I knew what I was up for and it sounded like a good idea at the time.
I didn’t place much emphasis on this event as all my focus had been on The North Face. Following The North Face however I was starting to wonder if I would recover enough in 3 weeks to do GWM. I was not impressed when I found out that my recovery time had turned into my taper time which had been cut to just 2 weeks because I got the dates wrong in my head.  Bugger. Leading up to race weekend my mind was set on how my body was recovering, how much climbing the course has, how cold the Wolgan Valley would be and how much rain would be falling. Not the most positive things to focus on in the lead up to a weekend away.


The Saturday before the event my husband, Brian, and our friends Dan and Kathy decided we would visit the Glow Worm Tunnel before the event. Kathy wasn’t running so it would give her an opportunity to appreciate the spectacle of the event. After a very slippery drive out there along Glow Worm Tunnel Road we arrived at the little carpark and then walked down to the tunnel. The glow worms were spectacular and the walk gave me an opportunity to familiarise myself with the high ground within the tunnel. I have done the tunnel twice with just a stick and I can honestly say that it is much easier with a torch, however the glow worms do appear much brighter when your senses are struggling in the dark. Following our visit to the tunnel, Brian decided to take Blackfellows Hand Road through the National Park to Wolgan Valley Road. We had done this before and it was passable in our Forester. Hopefully it would be passable again in the Forester along with our friends in their Vitara. As we dropped off the plateau, with 2kms to go the trail started to get rougher. We had assurances from some more serious 4WD’s that the track would be OK with our vehicles. We were going to find out.  The track soon deteriorated into something which was fast becoming scary. We bottomed out once and the track ahead was looking much worse. With light fading fast and being so close to the end Brian and Dan committed themselves, like they had any other option because reversing or doing a U-turn was impossible. They bounced (though not bottoming out again) and slid their way through and we were back onto a sealed road. Although proven to be passable again I don’t think that we’ll be doing that road again.
Off we drove, down into the Wolgan Valley and Newnes in the late afternoon mountain rain. We drove down to the old camp ground and met up with Joy and Ted who had already set up camp near the river. After setting up our tent we headed over to dinner at race HQ where we met Sean who was quick to inform me that Angela Bateup was expected to turn up for the marathon. Bugger. Although Angela had done the last leg of the pairs race at TNF (and got the course record), her depth of ability would easily have me covered on this course even on a good day. I’ll now be racing for second with Shona. Shona had done the full TNF and it took me a good part of the race before I caught up to her then finally pulled away. We would just have to see how we felt during the race. 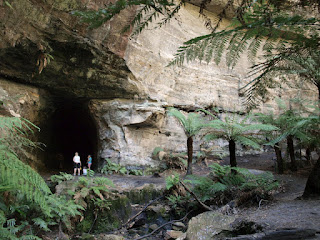 Actual Race Report
After a quick pack up of our camp site we drove off to the start line and breakfast. A quick catch up with Pete, Jeff and Lachlan and the Berowra Bush Runners compliment was ready to go. At race briefing we were told that in an emergency we are to blow three times on our mandatory whistle. My first thought was what mandatory whistle. I hadn’t read that in the written brief. Judging by the confused look on the other runners faces they hadn’t either. No problems, safety in numbers. In the interest of classing this race as a marathon we all walked 200m down the road to the pre-determined marathon start. On the way people started talking about only running with a head light for the first half marathon to the tunnel. As I saw more and more people shed their bags and left just holding a head torch I again thought no problems, safety in numbers. I’m not sure if this was someone’s play on words or if it was in fact what the race director (Sean) had in mind. I’m sure this will get clarified for next year.
So on a very mild June morning in Newnes under heavy cloud we set off on the first out and back to the Glow Worm Tunnel along the old Newnes train line. I was expecting the first section to be a little more flat, but it wasn’t. There were small sharp sections of down and up where the railway embankment had been washed away. This must have been in the fine print along with the whistle. These sections helped break up the grade and only added to the character of the event. I felt a little heavy and sluggish on this first section. The body was taking a while to loosen up and I wasn’t sure if it was going to get better or worse. How much had The North Face taken out of me? I was happy in my position and I could still see Angela  up ahead. Past the first check point the trail started to get a little dryer and the rock face a little steeper until the track suddenly turns left into a fern gully which marks the little stream which runs through the glow worm tunnel. At the start of the tunnel I slowed to a walk in accordance with glow worm edicate, turned my torch on and headed for high ground in the tunnel.

Out of the tunnel I picked up the pace again and proceeded out onto the old Coach Trail. Up over the saddle the trail dropped away back down to check point 1 and then onto familiar trail down to Newnes. The railway grade up to the tunnel was very gentle, if not flat, but on the way back down I could really notice the difference. My legs felt less sluggish and I started to open up a little. Back at the river crossing I was kindly reminded by Shona’s two little girls that I was third female and behind their mum. Thanks girls for the kind words of encouragement. 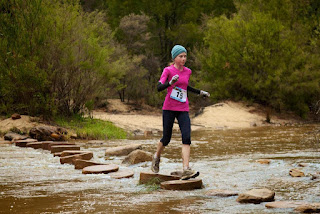 Photo by Shona Stephenson
Picking up my back pack I ran down the road towards the campground and the river beyond. I hadn’t done any of this next section and was surprised to see how much of the old village could still be made out. It was pretty easy to imagine the hill covered in little cottages with their own private gardens. The trail dropped to cross a little creek which fed into the Wolgan River. I looked up and saw a marker on the tree above so climbed the embankment and followed a trail which was made by someone ahead. I kept following it until I realised that it wasn't the actual trail. I looked over my shoulder and a guy behind had joind me. We stopped composed ourselves and spotted a fluro green ribbon on a tree up ahead. On we trudged until we re-joined the proper trail and headed off towards the big tank. The small detour didn’t cost me much time and only added to the adventure of the leg. A bigger adventure however was just up ahead. The climb up the Pipeline Track was announced with some brick steps heading up the hill. Well this didn’t seem too bad, but they soon stopped and the trail just continued to rise while winding up the hill. The trail was that annoying grade where you can still run but can power walk at just the same pace. So I mixed it up until I came to the ridiculously steep terrain. The power walk then became a climb with hands on knees and reaching out for rocks and trees to pull myself up. It was steep, but at least the climbing was direct. At the top the trail tapered out to another small saddle before dropping down into a fern gully which eventually spilled out into farm land. This was the only part of the run where I experienced a short shower of rain. I was glad that Sean had done some trail maintenance along this section as well as those runners in front as the vegetation was very dense and would have kept me at bay otherwise.
As I got into the little township of Glen Davis I kept an eye out for Angela but didn’t see her before the check point where Shona was just heading out. She hadn’t seen Angela either so she must have gone off course somewhere. After a quick drink of coke (races are the only time I have coke where the effects are noticeable) I headed back for the return trip to Newnes. I passed the Bush Runners Lachlan, in front of his dad Jeff, followed by Pete. I caught and passed Shona near where the farms finish and the fern gully starts. About half way up the gully I passed Brian. He let me know that Angela was about 5min ahead. That was too far to chase her down especially on terrain with a grade like this gully has. The decent back down into the Wolgan Valley was very slippery and I really questioned my choice of shoe for this run (a road shoe). I do have shoes with a grip designed for the mud but they were clean and dry at home.
The last 3km’s or so the trail winds back along the bank of the Wolgan Valley River and the whole time I was thinking Shona is catching. She would have hammered it down that technical decent and she would have closed any gap I made on the climb up. Along the last road section I took a few quick glances over my shoulder to see if I could see her but I was safe. I was happy to finish second in this race. The male and female podiums were full of runners who had backed up from TNF 2 weeks ago; Angela, Brendan, Mick, Shona and myself. I think that we were all equally exhausted following our efforts in these two demanding trail races.


I’m glad that I did the event. Mountain Sports really know how to put on a runners event. This is why I stick to trail events and don’t partake in the road events. The trail crowd really make it a pleasure to turn up and compete, no matter what. Now I think that I’ll have a proper rest before my next race. 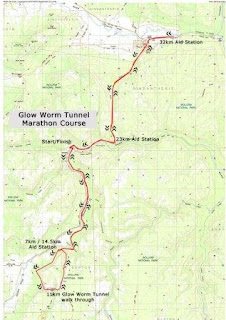